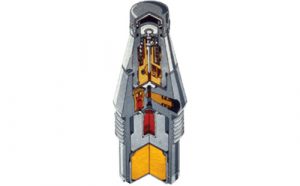 FUZE SAFETY
Before firing the Safety and Arm device prevents the ignition primer from positioning into the fire train. Even in case of unintentional ignition of the primer, no transfer of the firing pulse to the fire train can occur.

FUZE ARMING
The fuze is armed within 5 to 20 m from muzzle. At firing the set-back forces arm the fuze, fixing the elements of the fire train in one line.

FUZE ACTION
Upon impact the fuze provides SQ or delayed action of 0.006 to 0.015 s.
The fuze functions under the impact and inertia forces. The inertia device ensures ignition not only upon impact on solid ground, but also on snow or marshy ground.