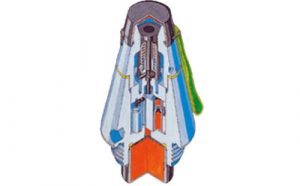 The fuze is supplied with safety cap, which has to be removed before firing.

DISTANT ARMING
The fuze ensures distant arming of not less than 40 m from muzzle. At firing the set-back forces arm the fuze, fixing the elements of the fire train in one line.