for Artillery and Tank Ammunition 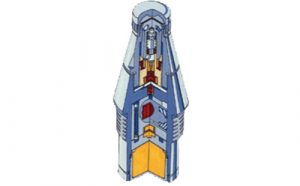 VUBS-1M is a mechanical, nose, point-detonating fuze with delayed action and short-timed self-destruction.

FUZE FEATURES
· Completes ammunition for both rifled and smooth-bore guns.
· Ensures round ignition on hitting target positioned within 1.500 m of the muzzle.
· Delayed action allows the round to pass through target shield and to explode behind.
· The fuze guarantees self-destruction of the round within 3.500 m from the muzzle.

FUZE ARMING
The fuze is armed within 5 to 20 m from muzzle. At firing the set-back forces arm the fuze, fixing the elements of the fire train in one line.

FUZE ACTION
Upon impact, the fuze provides delay of 0.02 sec.

SELF-DESTRUCTION
In case of no impact the round is self-destruct within 3.5 to 6 s.