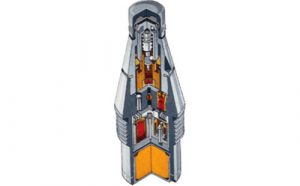 RGM-2 is a mechanical, nose, point-detonating fuze with selectable super-quick or delayed action.
The fuze is designed for High-Explosive, Incendiary and Smoke ammunition for howitzers in the following caliber:
· 122 mm
· 130 mm
· 152 mm

RGM-2 fuze features locking at firing from worn-out or strongly contaminated barrel.
The fuze is safe in storage, handling and operation and ensures the reliable and safe function of the ammunition in all weather conditions.