for 122mm HE Grad Rocket 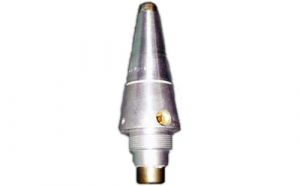 DISTANT ARMING
The fuze is armed after burning of propellant by the set back forces.

FUZE ACTION
The fuze functions under the impact and inertia forces.

The inertia device ensures ignition not only upon impact on solid ground, but also on snow or marshy ground.
Upon impact the fuze provides SQ, long-delayed or short-delayed actions.