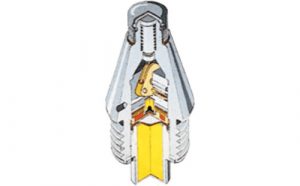 DISTANT ARMING
The fuze is distant armed at distance not less than 20 m from muzzle. At firing the set-back and rotational forces arm the fuze, fixing the elements of the fire train in one line.

FUZE ACTION
Upon impact the fuze provides delayed action within 0.002 to 0.004 s.

SELF DESTRUCTION
In case of no impact the round is self-destruct within 13 to 17 s.